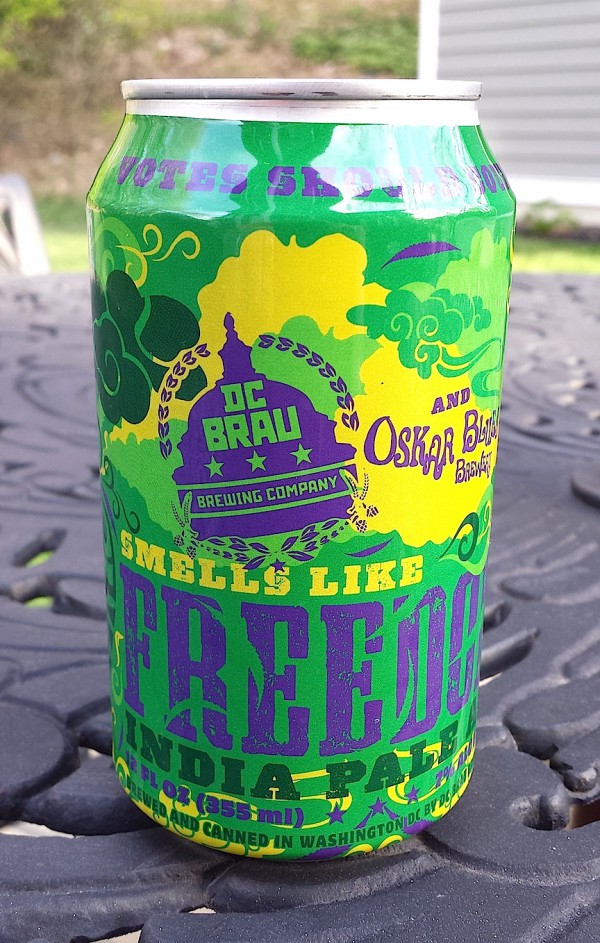 
Lots of pot references lately. There was Square Grouper by Pipeworks (96 points) . Apparently, slang for an abandoned bail of marijuana found floating in the ocean. Then there was Smells Like a Safety Meeting by Dark Horse (92 points) , a slang translation for a pot smoking break. In both cases, the dank hop resin really did remind of pungent pot smoke willowing at a Grateful Dead show. Why can’t they just say – smells like pot? Well, the government has rules against using drug names on beer labels (even though alcohol is a drug). Why the pot and beer references? Hops and cannabis are related – like cousins and there are a lot of similarities in their aromas.

Smells Like Freedom is a collaboration between Colorado brewer, Oskar Blues and Washington DC based brewer, DC Brau. In Colorado and Washington DC, marijuana for recreational use is legal with Washington DC voters recently approving the change in November of 2014. DC Voters overwhelming passed the measure with 71% voting yes. Despite the overwhelming mandate, Congress attempted to overturn the legalization and DC Brau protests the heavy-handed move with the phrase “votes should count” around the top ring of the can. DC Brau has long been a vocal supporter of statehood and autonomy for Washington DC.

There wasn’t much of this beer made and I was lucky to get a couple from a friend that travels to DC often. While Smells like Freedom has that similar (and very likable) dank pot-like resin, it doesn’t translate to the body of the beer in any stickiness or viscosity. It’s still delivers just the right amount of bitterness and the underlying sweetness delivers just enough to round off the edges of this beer. Enjoyed – 91 points.