Years ago, this beer provided me with a beer epiphany. My first sips signaled that craft beer had moved the brewing art to a whole new level. It was my first experience with bitterness levels beyond my comfort level. Up to that point, my IBU tolerance may have topped out at Sierra Nevada Pale Ale and its 38 IBU. Now it’s been about a year since I’ve had a Ruination. I’ve tasted and blogged a lot of beers since my last Ruination. I’ve had some very good double IPAs — my favorites include Pliny the Elder and Sculpin. I’m curious to see if this beer is still legendary to me — or have others simply surpassed the legend.

Quick notes — IBU is labeled as 100+ and ABV is 7.7%. I’ve ignored the color and head to marvel at the aroma. I’m picking up a surprising amount of sweet maltiness to go with some grapefruit. My first sip is quite interesting. I get a flash of that malt before the hops move in to dominate. Floral at first then changes quickly to a strong pine. But something buoys the hops from destroying your mouth. It’s an earthy undertone, some grains and sweetness. The hoppiness lingers on and on. Still an amazing beer. The legend lives on 93 points for me. 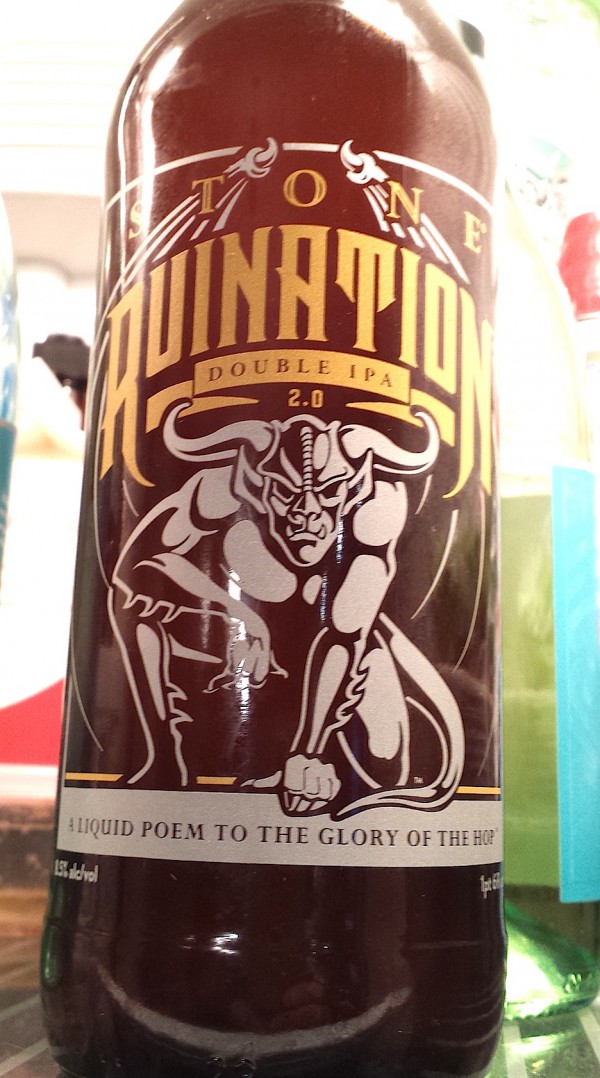 Fast forward nearly four years and Stone introduces the next generation of Ruination – Ruination 2.0. Alcohol by Volume amped up a few ticks to 8.5% from the original 7.7%. They updated the hop profile to include some of the more current and popular varieties like azacca to go along with old faithful centennial and citra. This one is all hop – dank aroma with a wide array of hop flavors from pine, to grapefruit and a bitterness that just won’t quit. Really no balancing sweetness here but it’s not expected. Really a nice update to an old favorite. It certainly lifts it beyond the copy cats that made the original hum-drum and in need of a spiff up. If only some of the other standards would follow Stone’s lead. I’ll still peg Ruination at a 93 and that’s saying something since my tastes have evolved over the last four years.