The family recently spent a walking around day in New York City. Primarily to meet up with a visiting relative from Wales but of course, we each had our own side agenda. The kids were thrilled to be playing Pokemon Go and I was happy to search for a decent beer store in the general vicinity. This time, I discovered the Urban Barley Beer Market on 6th Avenue. Not a sizable place, probably the equivalent of one aisle at a suburban beer store. Good selection. Almost fainted at the prices. A single can of Barrel-Aged Ten Fidy – 97 Points was $20. I was interested to find some Grimm IPA but this was all the Grimm the shop had. This bomber-sized bottle was $20.

Opened a few weeks later on a cold winter’s night. I am hopeful as I have a second bottle that I picked up a week later. That one was half the price at Cable Beverage.

Sumi Zest hits the ground running with a chalky fudge. Also carries some off-flavors underneath. The label says orange zest, I think Banana. Watery, Fizzy and acrid. Not much vanilla. Layer some coffee over that odd flavor. 84 points. Not a fan. Anyone interested in a bottle?

Do you think it’s a little odd to name a beer after someone that died of acute alcohol poisoning? Would the fact that the tribute is directed to former AC/DC front man, Bon Scott sway or solidify your opinion? After all, the late-Australian lead singer was posthumously honored by his former band mates in songs like Back in Black, Hell’s Bells and (ahem)…Have a Drink on Me. I’d have to think that Bon would be cool with it.

Well, this Queens-based brewery has a musical connection as the term “single cut” is a body style of guitar. With the exception of two beers all of their other beers have a music reference. I guess I should have read more about Shuggie when I wrote about Singlecut’s Soul Bender IPA (92 points).

I purchased a growler of Bon Bon TNT at Cable Beverage for an entirely reasonable $14.99. Shared most of it with my friend Mike after work today. Cloudy pour with some floaties like a Vermont beer. You can immediately tell this is a quality imperial IPA. Fresh tasting hops, green pepper, mango, grapefruit, cut grass and a zesty black pepper finish. Bon Bon TNT does lack a little in malt backbone but that’s probably its only fault (at least in my eyes). Funny, at the bottom of the glass and completely warm I pick up an oregano flavor. Very nice 94 points.

I’ll also note that I had a quick glass of Singlecut’s Billy Half-Stack, a 6.6% ABV IPA. Again, a music reference as in half stack of music amps. Like Bon Bon TNT, this IPA was made with Australian and New Zealand hops, this 88 IBU beer was certainly hop-centric but a bit more mellow than Bon Bon TNT. I liked it and I’m liking this brewery more and more. 90 points for the half stack

What is the difference between a Baltic Porter, a regular porter or even an Imperial Stout? They look the same, they may have the same elevated alcohol by volume and essentially they all use similar roasted grains. The distinction comes in the fermenting style. Basically, a porter or a stout is ale which means it uses top-fermenting yeast while Baltic porter is created by using bottom-fermenting yeast. So simply, Baltic Porter is by definition — a lager. Would a Stout and Baltic Porter taste the same? Possibly, but ale yeast may impart a some ester flavors ranging from mild fruit flavor (like pear or banana) to a strong solvent flavor (ethanol is the alcohol produces by yeast). Lager yeast imparts little or no flavor.

Considering that a Baltic Porter is a lager –it should not come as a surprise that Jack’s Abby, a brewery known for its lager, should venture into Baltic Porter rather than imperial stout. Based in Framingham, Massachusetts, it’s easy to put two and two together on the name of this Baltic Porter.

Once Jack’s Abby’s lagers started hitting shelves in New York (n/a in NJ), I’ve had my eye out for Framinghammer at and its variants (Coffee, Vanilla, Barrel-Aged). A couple of months ago, I noticed a sealed Jack’s Abby case by the entrance of Cable Beverage. My pulse skipped a beat when I turned the box around and it revealed a rubber-stamped “Framinghammer” on the box – scored two bottles.

I returned just a few days ago to the same scenario – a sealed Jack’s Abby case by the entrance but intially dismissed the possibility of a repeat performance. I’m glad I checked as I almost jumped for joy in seeing “BA” (barrel-aged) in front of Framinghammer stamp. I assumed a one-bottle limit – but scored two bottles once again.

We’ll start with the base Framinghammer. Other label notes — original gravity (or density) of 23. Anything over 20 is considered high density. Should translate to a rich body as well as a high ABV. IBU or International Bitterness Units are noted as 55 – or on lighter side of medium bitterness.

Pour is a cola brown with very light carbonation. Crisp and clean roasted flavors with moderate dark chocolate. A bit thin in body and the 10% ABV is barely apparent. A tad more sweetness than bitterness. I’ll put the base Framinghammer at 90 points. 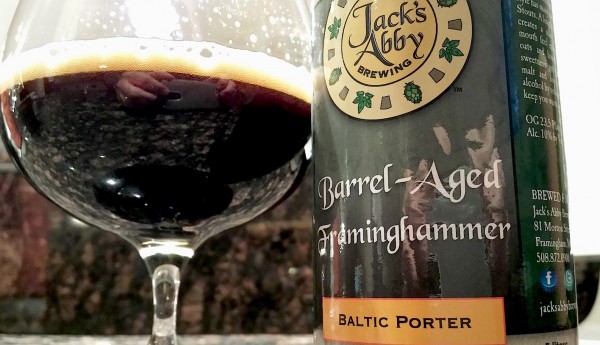 Kroovy was a growler fill from Cable Beverage in Rockland County, NY. On the way home, I wondered where the term “growler” came from. If this was 1980 – I’d have to ask and probably believe my dad’s definition (of course he’d probably be right) but voila the internet provides the answer:

In the late 19th century and into the early 20th century, fresh beer was toted from the local pub to one’s home in a small galvanized pail with a lid. It was said that when the beer sloshed around the pail, the escaping CO2 created a rumbling or a growling sound.

Today growlers are made of glass and allow consumers to take home beer from small breweries that don’t have sophisticated canning/bottling operations. This particular growler is 16 ounces and cost me $3.99. The growler itself added $1.99 as a one time fee – but I’ll be able to reuse the bottle on return trips.

I’ve heard a lot about Rushing Duck and in particular their double IPA, War Elephant. That beer should be returning to Cable soon and will warrant a return visit and a larger growler. Kroovy has a rich red color and pours somewhat flat – I guess that could be expected considering it was poured off the tap and has been in my refrigerator for 30 hours. Kroovy offers up some rich dank hop flavor right out of the gate. Tons of grapefruit and pine but the wisp of caramel in a malt base falls a little short. Kroovy also gives me some nice black tea flavor. Not bad at all – not bad at all – 88 points.