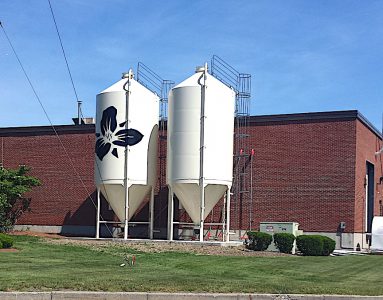 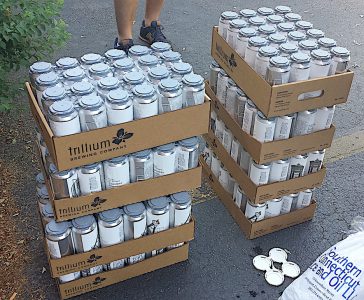 Cutting Tiles was once known as Artaic. A quick Google search on the term “Artaic” leads mostly to a Boston-based company that specializes in custom mosaic tiles. I’m not sure if there were any legal issues that prompted the name change. My guess is that the beer started as a Mosaic single hop beer and simply that Trillium started creating alternate hop versions like Galaxy and El Dorado. If anyone finds differently, I’d appreciate your insight.

The Trillium facility in Canton is a craft beer lover’s dream. While many breweries have restrictive limitations, you are limited here by your own wallet. There are typically six to ten offerings and many have up to one case limits. The day we were there, there were ten.

No real issue with parking. The lot has plenty of come and go traffic. If you travel here on the weekend, they may ask that you park in their overflow parking lot at 50 Hudson Street (just up the road 100 yards).

Here are a couple of other Trillium beers from our road trip (previously reviewed): Another high reputation IPA in my hands? This must be my own summer of love. This time, a four pack comes my way by way of a friend that went north on his way to see Phish. My own supply from my June trip to Trillium’s Canton, MA location has dwindled to a single bottle of Heavy Mettle. A four pack of cans was a welcome sight and I’m thankful to be popping one open.

Days after we visited Canton, Trillium announced that all of their hop-forward beers would be packaged in cans. Since I am a can collector, I wanted to turn right around and go buy more. I like cans for more than the esthetics. There’s the obvious light elimination for hoppy beer and quick chilling aluminum. In Trillium’s case because it offers some additional value. If you do the math, two 25-ounce bottles of their Fort Point Pale Ale would sell for $16.10 while a four-pack of 16 ounce cans is now selling for $15.20. That’s 50-ounces in two bottles versus 64-ounces in four cans.

This beer has some cat pee qualities. You’d probably assume that I dumped the beer down the drain. I’m confident that the brewer didn’t use cat pee in the recipe but I know that certain hops like Citra, Nelson Sauvin, Mosaic and Simcoe are the usual cat pee hop culprits. The result is a pungent and a little acrid aroma. At first, the hops come across as a tart pear.

My thoughts on other Fort Point variants: Trillium was our second stop of the road trip and we arrived at their Canton location right on schedule. Funny, the Sierra Nevada Beer Camp tour bus was parked in front but we didn’t ask any questions. We were on a mission.

We were off to the new tasting room open. The tasting room offers 5 ounce or 10 ounce pours with a maximum of 20 ounces. They stamp a card to keep track of your allotment. A 5 ounce of Dialed In convinced me to up my purchase to six bottles and my 5 ounce pour of Galaxy Fort Point Pale Ale convinced me that I have good taste in beer. One minor disappointment was that Artaic was listed on the draft list but was long gone. Next time. The lineup of beer available was exceptional. The photo looks like the Mount Rushmore of Trillium offerings. Double Dry-Hopped Congress Street currently ranks a perfect score on Beer Advocate and checks in at #35 on the Beer Advocate Top 250 beer ranking. Meanwhile Galaxy Dry Hopped Fort Point also has a perfect score and currently ranks # 44 on the same list. I’ll also note: Heavy Mettle # 112, Vicinity # 150, Dialed In # 202. It’s an all-star list and I’m happy to have a combined two cases to take me through July.

A tropical aroma fills the room (or at least the general vicinity) when I pour this cloudy IPA into my snifter. It really looks like orange juice. Right out of the gate is that trademarked Trillium pillowy soft mouthfeel with loads of complexity. There’s tropical fruit sweetness of mango and pineapple, mellow bitter of an orange rind with some grassiness. It all rounds out to a crisp finish. Amazing beer 97 points.

read my thoughts on the base beer Congress Street – 95 Points

I have been looking forward to the day when I could crack open this beer. Over the last couple of years, the trade market was dry and as recently as the morning of our road trip, Heavy Mettle was was still listed on the “coming soon” list at the brewery. Seeing it available was very exciting.

Mettle is already an imperial IPA with an ABV of 8.4% so seeing it kicked up to 9.3% in Heavy Mettle peaked my interest. Same opaque cloudy pour and bursting aroma. Really dank raw green, smokey, pot-like and a really nice tart-pineapple sweetness to carry the load. As usual has wonderful fullness. Booziness is well-concealed. Actually, not hint of it at all. Not sure how many more superlatives I can heap on Trillium. 96 points.

read my thoughts on Mettle – 94 points


It’s just a broken record with me telling you about the awesomeness of this brewery. Dialed-In was their third anniversary offering released earlier this year and this version contains some tweaks to the recipe. As far as I can tell, they’ve substituted Sauvignon Blanc grape juice with Chardonnay grape juice and Galaxy hops in place of another New Zealand hop – Nelson Sauvin. Here’s the description of Dialed-In from the brewery’s website:

This iteration of Dialed In is a fresh, juicy Double IPA intensively dry hopped with Galaxy and Citra. Pouring a vibrant, hazy gold; aromas of white wine, tropical fruit, and citrus swirl around the nose. Upfront flavors of grassy hop, orange juice, and pineapple coincide with vinous notes from the mid-fermentation addition of Chardonnay and Gewurztraminer juice. Soft and creamy with moderate bitterness; Medium-Light bodied with a crisp, dry finish.

Love the idea of wine grape addition and loved the sample in the tasting room enough to up my purchase from 4 bottles to 6. Right up front, pillowy, pithy orange rind, not as much juiciness as other offerings. The white wine takes over mid-palate and it rounds to more of a crip wine finish. 93 points.

This image is from my photo archive. I just can’t get over what beautiful beer comes from Trillium.